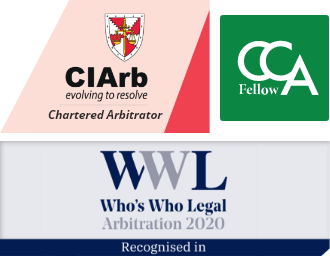 Amb. Huebner has handled more than 300 arbitrations in three dozen jurisdictions around the world as arbitrator or advocate, under the rules of more than a dozen arbitral institutions.

He has been named to the Silicon Valley Arbitration and Mediation Center’s “List of the World’s Leading Technology Neutrals” and to the inaugural Sino-US Joint Panel of Arbitrators established by Shenzhen Court of International Arbitration and JAMS to resolve cross-border technology and other IP disputes.

Ambassador Huebner has served on numerous arbitration and other professional board, including serving on the ICC Commission on Arbitration and ADR and as chair of the Chartered Institute of Arbitrators’ North America Branch.  He currently serves as the trustee for the Western Hemisphere on the board of trustees of the Chartered Institute of Arbitrators, as well as the board’s treasurer and chair of its audit & risk and governance committees.

He has received a variety of honors for his service, including the CPR Institute’s 2020 Outstanding Contribution to Diversity in ADR Award for his full-spectrum inclusiveness efforts in the arbitration sector.

He is a member of the Bars of California, New York, and the District of Columbia, a licensed solicitor in England & Wales, a Fellow of the College of Commercial Arbitrators, and a Distinguished Fellow of the Auckland University of Technology Faculty of Business and Law. The Chartered Institute of Arbitrators has conferred on Amb. Huebner the title of Chartered Arbitrator (C.Arb), its highest qualification.

He previously worked at Arnold & Porter LLP in Los Angeles (2014-2016), Sheppard Mullin Richter & Hampton LLP in Shanghai (2006-2009), and Coudert Brothers LLP in various offices (1992-2005). He was a partner in the arbitration, intellectual property, and public international law practices of the firms. He began his career as an associate at Irell & Manella LLP (1987-1992) handling patent and other intellectual property arbitration and litigation matters in the technology and life sciences sectors.

Over the course of his career he has been regularly listed on a variety of “best” practitioners lists in his fields of practice. Most recently he was named to “Who’s Who Legal: Arbitration 2020” and to the Silicon Valley Arbitration and Mediation Center’s “List of the World’s Leading Technology Neutrals.” The Chartered Institute of Arbitrators has designated him a Chartered Arbitrator, its highest credential.

From 2009 to early 2014, he served as the American Ambassador to New Zealand and the Independent State of Samoa, appointed by President Barack Obama. He was widely acknowledged to be an effective and influential diplomat and received a number of awards for his dispute resolution, public engagement, and science and technology work, including the U.S. Navy’s Distinguished Public Service Award, Public Affairs Asia’s Gold Standard Award, and a Royal Society of New Zealand’s illuminated manuscript honor. The Smithsonian Institution took certain of his papers and artifacts into its permanent collection of American history.

He has been a guest lecturer at universities in the United States, China, New Zealand, and Germany. Most recently, he taught a full-semester course in intellectual property law and policy at the University of California – Los Angeles School of Law. From 1999 to 2007 he taught full-semester courses in international arbitration, international intellectual property, and international business transactions at the University of Southern California Gould School of Law.